On 23rd September, the second day of the SHui General Assembly in Prague, the team of Prof. Dostál (CVUT) organised a day to experience all aspects of current soil erosion research. It started with an excursion to the experimental catchment in Nučice for physical attendees at the assembly. It was followed by an afternoon theoretical and a practical interactive session, aimed at both young scientists and experienced researchers, irrespective of whether they were physically in the room or online, which was delivered by Dr. Josef Krása and his team.

Dr. Krása first introduced GIS-Assisted estimation of soil loss and sediment transport, providing an overview of the different sediment transport modelling approaches on a regional scale. He then focused on the USLE based WaTEM/SEDEM model, showing its application at the field level but also considering scales for which it is unsuitable. The lecture went through all important aspects of erosion modelling, including model principles, input data, model output for decision support, and model uncertainty. A key issue was the difficulties of calibrating and validating sediment transport (based on individual sampling of suspended solids concentrations) compared to “only” calibrating and validating water discharge (with continuous measurements). 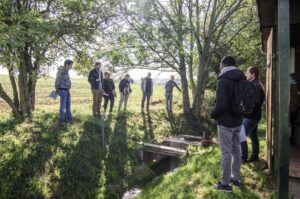 After introducing the Vrchlice watershed and some relevant publications, the practical session involved the use of the WaTEM/SEDEM Model with data from the Vrchlice watershed. The hands-on session was guided by Dr. Krása, Dr. Bauer and the erosion team to experience the process step by step and its difficulties. Different input datasets were considered, running the model, and finally evaluating the results using ArcMAP 10.8. There were 7 physical attendants and 15 online, with this hybrid event a first for the SHui team.