With a boot full of cover crops, a back seat crowded with posters and  a strong coffee secured firmly in the cup holder, we were ready for our trip to the Low Carbon Agriculture Show. After the slow post-lockdown return to fields and laboratories, this marked another big step towards “normality” with an in-person outreach and engagement event. Dr Ryan Edge and Professor John Quinton were our men in the field, representing SHui at this important agricultural trade show.

More than just pushing low carbon initiatives, the show is about promoting businesses and technologies that support long term sustainable farming initiatives. Held in the centre of the UK, the event attracts farmers and support businesses from right across the country. We met people from as far south as Somerset to as far North as the Scottish border. Our mission was broad but simple. As part of a wider Lancaster team including another European-Chinese project Tudi , we aimed to spend two days talking to the public about some of the amazing work going on in SHui and gaining insights into how we may better align our research and outputs to meet the needs of local farmers. As first timers at this long running show, this was an opportunity for us to reach out and engage with an audience that we’d not usually interact with in the academic sector. 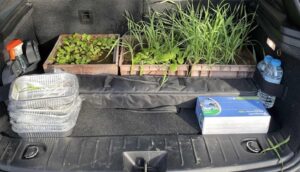 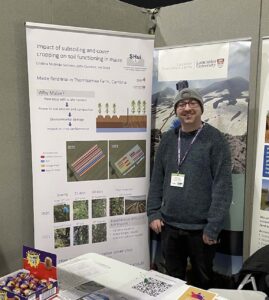 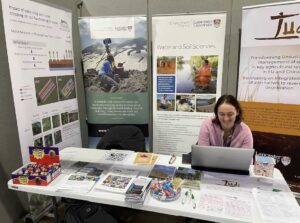 Overall, people were very receptive and highly engaged with our stall. Interest in the SHui project was primarily regarding the field trials we have running in Cumbria, as well as some of the irrigation models produced by the project. A particular highlight was the often-lively debate on the use of cover cropping for maize. Topics ranged from a simple whether it was worthwhile in the first place, to the timing of planting and the best species to use. The result of these debates will inform our final field trials. This demonstrated the value of attending events such as this, where you can benefit from the combined knowledge of people that have worked with these crops in real farming systems for generations.

The scope of the show in terms of both people and scale were almost overwhelming. We estimate to have spoken to more than 300 individuals. These ranged from single farmers to those that represented large consortiums, many of which were more than happy to distribute our contact details and newsletters across their networks. Conservatively, we reached over 1000 people over two days. What was most telling is that many people were surprised to see us there. We took this as a good sign that we were reaching new audiences and getting a fresh perspective on the project.

On the long drive back to university, I had plenty of time to reflect on our two days at the show. In a world that now seems dominated by online meetings and the ubiquitous phrase “I think your microphone is still muted” it is important not to lose sight of the value of the unhindered debate and spontaneity that is intrinsic to real world interactions, but is often missing from the more controlled, and in every sense of the word, more sterile online environment.