SHui researchers were strongly represented at a session of the International Symposium on Managing Land and Water for Climate-Smart Agriculture 2022 (Vienna, 25-29 July 2022) that was dedicated to the crop growth model AquaCrop. This model has been an essential research tool within SHui, as our researchers have

The symposium was aimed at a diverse group of participants including:

Over 150 attended the conference in-person, with another 600 registrations online, indicating its importance to this audience.

After Pascuale Steduto, formerly with the Food and Agriculture Organisation (FAO), introduced AquaCrop, Maher Salman also of the FAO provided a retrospective analysis of its academic impact, aided by SHui’s Margarita Garcia-Vila. AquaCrop has been used to analyse the responses of 46 crops, facilitated by extensive knowledge exchange symposia in different parts of the world (67 workshops in 40 countries attracting > 1500 participants) and dedicated training videos to assist those learning how to implement the model. As in SHui, it has helped to assess the impacts of climate change, inform irrigation management and determine the water productivity of diffefrent crops and environments. Future developments of AquaCrop were also foreshadowed.

Elias Fereres of SHui then provided an overview of efforts to simulate the impacts of climate change (CC) using AquaCrop. Whether future climate would affect positively or negatively agricultural productivity depends on the crop responses to elevated CO2 which still are difficult to predict in CC assessments. While CC is predicted to decrease crop yields in some of the poorest regions of the world, it was heartening that the model suggested farmers could adapt to mitigate the impacts of climate change by increasing soil fertility. Moreover, some studies suggest that potential irrigation requirements may diminish for some crops under a future climate.

A number of speakers, including SHui’s Margarita Garcia-Vila, then provided case studies of where AquaCrop was being used around the world to aid decision making at national, catchment and plot scales, including Belgium, Ghana and Lebanon. Finally Dirk Raes of KU Leuven summarised new developments in AquaCrop.

Watch the recordings of the meeting here. 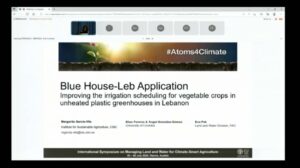 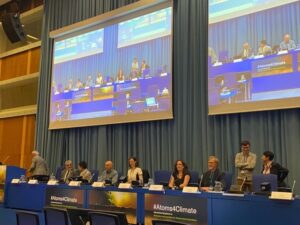 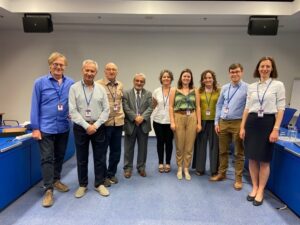