Catch and Cover Crops ON FARM DISCUSSION AND DEMONSTRATION AT LANCASTER

Braving the best (& worst) of the Cumbrian climate, 20 local farmers joined Lancaster’s SHui team at an afternoon event on 1st October, hosted by Andy Dyer of the Eden Rivers Trust on land at West View Farm Penrith, which is owned by Robert Harris and farmed by the Taylor family from Plumpton Old Hall Farm.

The Lancaster team showcased ongoing research with undersown catch crops within local maize fields, in aiming to prevent soil erosion post-harvest. Field walks were undertaken into neighbouring fields to demonstrate visual soil assessment and its importance in underpinning future payment schemes. Catch crops (rye / vetch mixes) had been planted following winter wheat harvest, with extensive root (and rhizosheath) development apparent, in fields that either had or hadn’t received treatment with the panbuster/drill combination that was showcased pre-pandemic at our last in-person event.

There was extensive discussion about the benefits of catch crops in boosting soil organic matter, along with the challenges of their establishment with unseasonal climatic variations in the autumn post-harvest. Their use as “insurance feed” within mixed livestock/arable farming systems was a common theme. 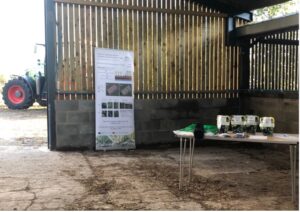 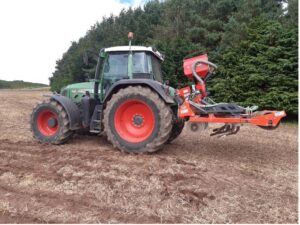 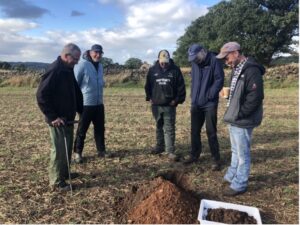 The continued use of catch and cover crops within arable rotations will become ever more important in years to come as the farming community comes to grips with the payments available and the requirements under the Sustainable Farming Incentive (SFI) Scheme from 2022 onwards. The arable and horticultural soils standard, within the current SFI pilot, requires that at least 5% of the land entered into the standard must have an established green cover on it from early to late winter. The green cover can be an autumn sown arable crop or a specifically designed mixture (such as that sown on the farm on which the event was held). The green cover will help to protect the soil surface from erosion and provide root growth to help maintain soil structure, support soil biology and minimise nutrient leaching. Each year an assessment of soil structure, soil biology and soil organic matter must be assessed on at least 20% of the land entered into the standard. Understanding soil health and how soil ecosystems perform has therefore never been more important for farmers and landowners.